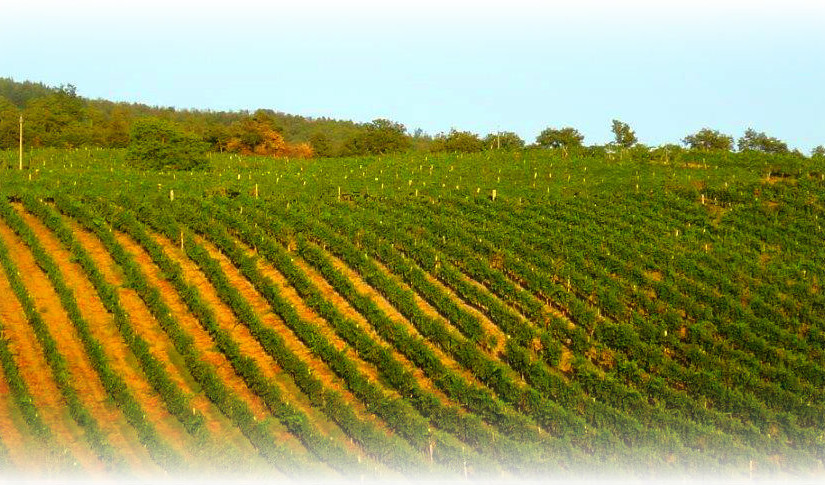 Jurgen’s house … one step inside and I know I’ve found it! It is exactly right. As it was the cattle wing, it juts out southwards, with the main house behind it. The front door is a massive arch, used for wagons to come in and out. We walk into a terracotta tiled hall with stairs leading to our right. A tiny passage leads past an arched enclave, ‘Where the cattle feed was mixed’ says Stefan.

I go further, down three steps, and simply sit down, trying to let it all sink in. All around there is light and views – to the east through huge arched double glass doors onto a vineyard sloping vertically upwards, to the west a mirror image of the doors, with views across a valley onto a ploughed field and a house on the top of the ridge. Straight ahead, to the south, two arched windows lead my eyes through the woods and to the valley below. I am sitting on a raised ‘spit’ of land with a 180 degree view all around me.

‘But you haven’t even been upstairs!’ Stefan’s voice is incredulous, disbelieving.

Liam looks at me. It’s a long, measured, and sombre look from those intelligent brown eyes that I know so well. He turns to Stefan. ‘Well, where do we go from here?’ he says. ‘How do we go about it?’

‘Well, let’s look over the remainder of the house, and then we will talk,’ Stefan says.

The rest of the house is just as good. There are two double bedrooms upstairs, with the same gorgeous views, and a small bathroom with one of those continental hip baths usable only if you are a contortionist.  ‘Lovely,’ I say, ‘All lovely. Two bedrooms are just fine.’ I say.

‘Too bad we have five children,’ I think ‘We’ll just stack them up the walls.’ I’m clearly not thinking straight at all … did Liam really say we’d buy it? No-one has even mentioned a price. It doesn’t matter. Sometimes in life you know that something is right, and I know that this house is right. It is in perfectly good condition so that Liam’s nightmare of restoration will not come true. It is also small and manageable. Because it was the cattle wing, the big house tucks behind it, making this section part of the community of the house, and yet peculiarly private.

Neither of us would have wanted a large free-standing house in ‘Chiantishire’ where we would only speak English, getting little chance to mix with neighbours. In this house we will either speak Italian or nothing. Nobody can even say hello.  But best of all, the owner has neglected the garden for 35 years. Liam will literally be able to ‘grow a garden’ from scratch. Plan it, landscape it, and work in forever.

Back downstairs we walk onto a small terrace facing east. It is enclosed by a low bay hedge and the view is simply stunning. There’s a small blue tractor working the vines, buzzing up one line and down another.

‘Oh’ says Stefan, ‘I’ve forgotten to show you the apartment.’

‘There’s an apartment attached to the house,’ he says ‘It’s between Margarethe’s terrace and Jurgen’s front door. You have to go up some steps. We go now.’ Up narrow stone steps there are some ancient dark wooden doors – ones with huge black hinges and a solid bolt. We open up and walk into a small hallway. To the right are steep, wooden circular stairs. ‘Mind your head at the top.’ says Stefan. Once up there is a small door, so low that it has had to be cut according to the slope of the roof. We duck our heads and suddenly find ourselves in the most enormous room. It is simply gigantic.

Stefan walks across and opens the shutters. Light floods in, bringing the same vineyards and little blue tractor back into view. There’s an old black wrought iron bed and a large chestnut wardrobe opposite. The floor is a sort of mottled yellow and black stone, rather like the floors on the older tube stations in London. ‘This room may have been a sitting room once,’ explains Stefan. ‘These floors are common from that era, and with the cattle living below, the warmth would drift upwards in the winter time.’ Off this room there is a small kitchenette. ‘Wouldn’t matter if we had ten kids in here,’ I think happily.

Once out of the house Stefan shows us the extent of the land. In front of Jurgen’s section there is an access ‘ring’ track at the bottom of the slope. It leads only to the eastern side, to Margarethe’s other terrace.  Jurgen owns the top half down towards the track and Margarethe owns the bottom half. Both are a fair size, south facing with a gentle slope. There is further land to the west.

This land would be ours. It is about two hectares running down to a stream, and away down the valley. It is a tangled mass of brushwood and thorns and one can barely see the tips of the olives sticking out of the top. ‘Pasquale has always wanted to clear this,’ says Stefan ‘he wants to restore the old olive grove, but for some reason Jurgen would never let him.’

We turn back, walking slowly up the slope. I drop back and walk on my own. All around me are white cabbage butterflies, dipping in and out of the rosemary and lavender. Now and then giant bumble bees land on the blue flowers. I watch one of them land and take off again, heavy with nectar. ‘Maybe,’ I think ‘Just maybe … I can have my very own apiary, and my own bees will be busy working, gathering honey to fill my very own bottles?’

Ahead of me, Liam and Stefan have their heads down, discussing the logistics of a sale.